After a few weeks of traveling, I’m now (almost) settled into Stockholm.  I’ve got a co-working office, a CrossFit gym, and some quality local food/coffee.  It’s pretty great as everything is within a 6 minute walk, but I’m still figuring out the best way to assemble my day.

One thing during traveling I didn’t anticipate was the lack of electronic device charging in Norway.  My girlfriend and I only had one compatible charger, and our phones had top priority, followed by a minimal charge for the computer just to keep it alive if necessary.  It really hit home how dependent I am on my devices and the simple ability to just charge them! I couldn’t blog, I had to access some things on my phone that were clunky compared to on my computer, and in general had to restrict my usage to preserve battery life.  Of course we could have spent some money and bought more adapters just for Norway, but I really dislike how much money I’ve wasted throughout my life on adapters that are useless after a few days.

A quick roundup of where we’ve been the past few weeks: St. Petersburg (and Tampa) Florida, Oslo/Norway, Stockholm/Sweden, and some islands in Sweden outside of Stockholm.  We’ve been hanging out with different friends in each place, so it has been a pretty busy period compared to my normal gym/write/read/crypto/tv life.

Some quick random thoughts about each place:

I realized I’m harping a lot about cost of living, but it really matters to me as I get older.  When I travel I like to project my life and consider how much I would like living in each place I visit.  The Bay Area was great in many ways, and there are versions of me that could be there in the future, but it really opened my eyes to living in the rat race.  Excluding some outlier event that makes you super rich, even with any normal (high) tech salary it’s difficult to ever feel like you’re living comfortable there.  Money just churns through your bank account into your landlords (or the bank for mortgages). You can probably take time off and re-discover yourself if you’re single and living on a shoestring budget, but otherwise the clock is always ticking.  For me, and I think a growing amount of people in the future, taking time off and finding/learning new skills is pretty much mandatory. This is both for staying relevant in the economy, but also personal sanity. If I had just went from one trading job to the next just because that’s where I started my career (I took a long break starting in 2009) I don’t think that would have been great for my sense of purpose.

I’m not sure if I mentioned these articles’ before, but they personally brought me a lot of inner peace and clarity about finances:

I don’t agree with some of the other ideas and personal philosophy by this blogger (I like living more cheaply, but not to the point of drinking olive oil for calories because it’s cheaper), but I respect different opinions, and these two really spoke to me.

On the creative front I’ve been writing sporadically, but enjoying it more.  It seems like a small detail, but it’s been huge for me. I’ve always loved the act of having written more than the act of writing itself.  There was a period where I even believed the Hemingway quote, “There is nothing to writing. All you do is sit at a typewriter and bleed.”

I think that feeling that writing always needs to be forced wasn’t conducive to me getting excited to start.  I’ve been doing a combination of writing more things that I enjoy, reading amazing writing (still mostly short stories), and meditating more consistently.  Now if I miss a day of writing it’s less guilt and more a feeling of missing out on something fun.

I have an abundance of books that I’m enjoying right now — it’s almost overwhelming.  Luckily for me I have Kindle, and take a sip from whatever I am in the mood for. I’ll make some recommendations when I start finishing some which is taking a while as I read 1-5% of a rotating list of approximately 10 books.

I finished a short a week ago, but I’m going to hold that one back and just put out this slightly longer blog post.  I’ll probably do some longer blogs with more personal insights, and occasionally shorter with a story, but no set pattern yet.

On a final note I flew in a 4 seater plane above Sweden (scary but really fun) and got this pic: 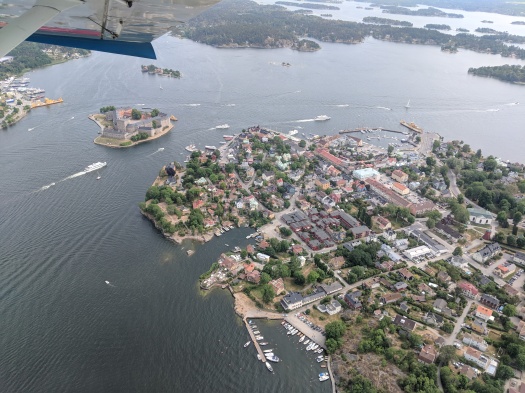