It’s a sunny day as always here in beautiful Medellin, Colombia.  I missed my Sunday blogging session, but that tends to happen when I’m “on vacation”.  I’m visiting my friend Ari for a week who is learning Spanish via immersion/classes. I am also surrounded by Spanish in Puerto Rico, but my Spanish progress with no structured learning is pitiful.  A large percentage of Puerto Ricans are also completely fluent in English, and if necessary I can usually ask a stranger passing by for a translation.

I really like that the Medellin English level is close to 0.  It’s surprising how much I can actually communicate when necessary.  A lot of Spanish words sound like English, so just guessing what they are saying combined with my 3-year old Spanish skills has been working.

I was in Medellin 1.5 years ago, and it seems mostly the same except for a fair amount of new gringos like myself.  I hang out in the two upscale neighborhoods, El Poblado and Laureles, and I remember not wanting to make eye contact with the other foreigners.  We had an unspoken pact that we would pretend that we had this awesome city all to ourselves, and that we were on the bleeding edge of travel/nomading.  Now the secret is out apparently, but it’s still far from overrun by tourists.

San Juan being part of the United States is more affluent than Medellin, but you wouldn’t think that walking around El Poblado.  The architecture, design, fashion, and pure quantity of upscale businesses is overwhelming. There are so many restaurants that I want to try, but can only fit so much into a week.  The price-to-quality ratio almost makes me feel guilty. I went to a 10-course dinner with wine pairings for around $100, and that was considered “overpriced”. In general even at the fancy places my entrees are never over $10.  Coffee at the snooty places I like to frequent is $1-2. Everywhere else in the world seems to be colluding that if you’re in a fancy hipster area a poke bowl can be $15, and coffee should be $4-6, no matter how low the per-capita income is.

I love that it’s still cheap here, but I don’t expect that to last another 3-5 years.  At some point Chinese and American tourists will start showing up, and the prices will shoot up as locals realize how great of a deal they are offering.

As far as nomad spots Medellin would be on the tippy-top of my short list that I would excited to spend time in.  I’m considering doing some type of half-nomad year, doing 1-2 places a year for 1-3 months each. I really like Puerto Rico, but it’s hot in the summer, and I still enjoy traveling as long as I don’t fall into a productivity death spiral.  It’s still up in the air, but it’s something I’m thinking about for next year.

Here’s a little summary of the pros and cons for myself (to document as I’ll probably forget)  and anyone else considering staying in Medellin for a while:

Overall I wouldn’t be surprised to see myself spending a longer period of time here next year.  The pollution is tolerable, especially if you know you are going to spend time in fresh air the rest of the year.  I went a little crazy breathing in motorbike exhaust in Bangkok for 3 months, which is worse, so I’m always a little paranoid now about pollution.  There is a lot of accessible hiking and nature around the city, so I imagine incorporating that into the weekend would help a lot.

I’m coming back to Puerto Rico tomorrow, and looking forward to getting back to my newly structured life.  I seriously did consider extending my trip though… but I equally miss my routines as much as I wanted to stay.

Leaving you with a few pics in order: view from the top of the rock at Guatape, the Guatape rock that we hiked, an awesome outdoor gym at the top of a hike in the city, Medellin at night. 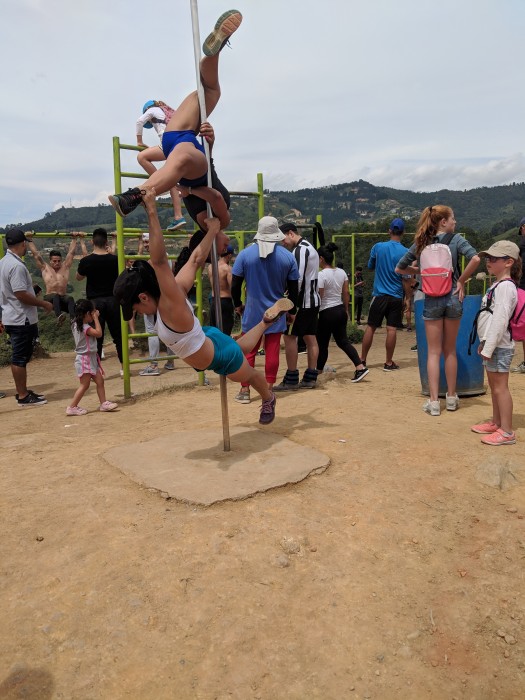 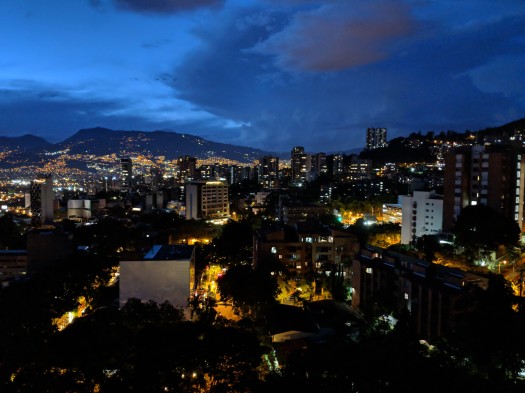 2 Replies to “Week in Medellin”