I’m sipping a latte in shorts and a t-shirt, watching the rain drizzle in an open-air cafe like a proper digital nomad.  The digital nomad world is kind of like hipsters; I am firmly entrenched in many aspects of the lifestyle, but I strongly don’t identify with it.  Exploring the world while working and having a balanced life I support very much, but there seems to be a high concentration of people trying to sell weird self-improvement courses/consulting.  I guess we’re all selling something though, and perhaps over time I’ll mellow on it.

I mentally booked a couple of more trips for the year, and now am procrastinating just a little longer on purchasing the flights.  I forget that trips and nomading come to me, and that I don’t have to force it by planning out a year in advance. It feels more organic this way too when friends invite me for trips, or there is a specific reason to go somewhere for a period of time.

I’m going to Costa Rica for 3 nights in February with my friend Jahved from  Insight Data Science. It’s a group of his friends renting a large house, and it sounds like we’ll have a fun itinerary of outdoor activities.  I read a book about nomading tips last year, and the one thing that stuck with me was the importance of going out of your way to see people. Surprisingly to me it’s easier to get to Costa Rica from LA or New York than Puerto Rico, but all of the people going have important day jobs, and I’m as flexible as I want.  It’s not often I connect with new people, so I wanted to make sure to not pass up on a unique chance to hang out when he invited Johanna and I.

Pretty much immediately after Costa Rica, perhaps even the day after I get back to PR (or as I’m writing this I realized we might just go from there… I haven’t booked the tickets yet), we’re planning to go to Bali, Indonesia for 5 weeks.  Another friend Ty has been Inceptioning this idea to go to Bali for a while now, and I had no interest until he sold me on the plan to go for 5 weeks to a huge CrossFit gym there called Wanderlust during the CrossFit Open. They have onsite Paleo meal prep, loads of cafes, co-working, some surf, and an abundance of hipster/nomad infrastructure.  Although I’m not even doing the Open, I fell in love with the idea of a 5 week health challenge of CrossFit, yoga, and eating extremely clean during the Open period there. It is currently ranked #1 in the world on Nomadlist for places to go, and it was just the right amount of reason to make the randomness of it make sense for me.

I already tentatively have Sweden planned in late summer, and climbing Mount Everest in Nepal/ visiting India after in September, so the year is getting booked.  I’m also very much looking forward to visiting my friend Jeff in Montreal once he settles there and the sun is out (I don’t have proper winter clothes I realized after going to Michigan for Christmas).

The key battle during all of this is being productive with my work, but it has been going well.  I’ve really been working hard on making it easy and fun to make bits of progress each day. This past week I’ve been meditating for 20 minutes, followed by a coffee, followed by at least 20 minutes of writing.  I then eat, and get into my data science/financial work. That part is pretty easy for me to get into a flow once I start, and doing a few hours of that, the personal stuff, and working out has been adding up. I realized I don’t have to write a novel, become enlightened, or build out an algorithmic trading desk to rival Goldman Sachs by the end of the month.  If I keep doing a little bit and compounding the improvement every week though, things eventually grow into something impressive.

I’m traveling the island this weekend as Johanna has a friend in town, and leaving you with a pic from the jungle I took a few days ago. 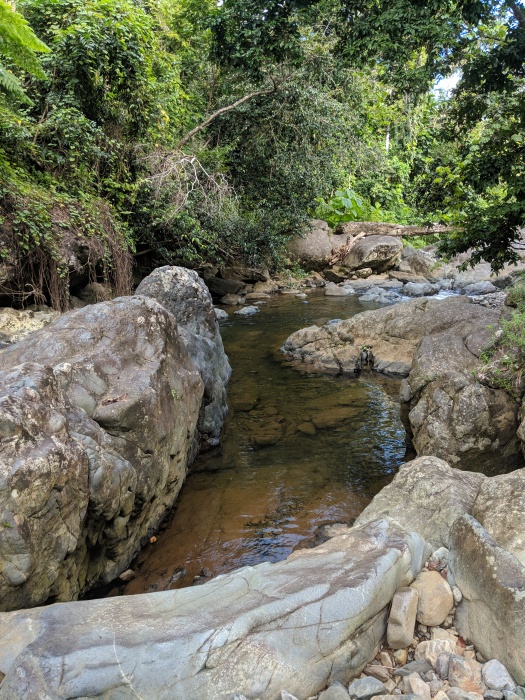