It’s Sunday and I’m live from Montreal, Canada.  I’m sitting in a cool co-working space called Crew Collective, which converted it’s space from a beautiful old school bank building.  It reminds me of some of the opulent financial buildings I used to walk through in Chicago, except this one is actually meant to lounge in.

I’ve been in Montreal for 4 days visiting my friend Jeff, and leave tomorrow.  As far as the city is concerned it’s very different than expected.  In my head before leaving I flickered between thinking it would be like a colder Paris or a Canadian Chicago.  A natural habit for me is to typecast anything, and I can’t put this place in a strict box.  I am glad and enjoy that though.  The city does have elements of Paris, Chicago, and Canada in general, but also a friendly atmosphere that is missing from any cold city that I’ve been to.  The one thing that was exactly as I expected was the cold, I can’t deny that.  Yesterday, and in particular today, the weather has made dramatic 20 degree changes though.  It’s morphing from layering up and avoiding being outside too long into wanting to stroll along the beautiful European cobblestone streets.

I didn’t realize how big Montreal is.  Not just the population (1.7 million people), but also how many interesting and livable neighborhoods it has.  I’ve been to some great restaurants (thanks to the brilliant curation from Jeff) with Joe Beef as a standout, as well as great cafes (more specialty coffee places than you could visit in a summer) such as Hvmans, Cafe Myriade, and Tommy.

One of the best parts about Montreal to me, and again I didn’t know anything about this, is that it’s also a college town.  They have multiple universities in the city (McGill and Concordia I saw at the very least), and that energy is spread around the cafes and places I went to.  In a lot of cities I go to pulling out your laptop and working isn’t always easy. No wifi, no outlets, and not much table space all discourage me from hanging out and working.  I enjoy socializing at cafes, but I also really like to work in public. I don’t have an office/real job, and it can be isolating working by myself year round, so I love when I find public places I be productive in.  It helps when other people are in that mode, thus I have a strong affinity for college towns. There’s an optimism that I noticed here in Montreal the students smiling, just looking down the road one step thinking if they get an A in Linear Algebra life will be good.  It’s something I’ve come around to myself. You can only control your actions in this moment and the next one, and if you choose the right actions overall things are going to turn out fine.

As far as nomading in Montreal I could see it being a great option for the summer.  There are many areas to live where you can co-work, get groceries, and live without worrying about driving.  I think it would be easy to get my normal life setup quickly here. Being honest I wouldn’t subject myself to the cold outside of the summer by choice unless I had to live here year round for work.  I talked with Jeff about it, but it would be interesting to figure out how I would adjust my activities to enjoy the winter more. I would probably prioritize my apartment more and make sure I have a fireplace, luxurious bedding, plush couch blankets, etc. to make it more enjoyable to be inside.  In Puerto Rico even with the air-conditioning blaring I can barely sleep with a thin blanket. I forgot how enjoyable hot showers in the morning when it’s cold out are as well.

Outside of seeing the city and it’s interesting diversity of residents, I enjoyed even more hanging out with Jeff.  I’ve known him for 15 years next month (we met at my first job out of college), and he’s one of the most introspective people I know.  It’s a quality that I felt alone with growing up, always questioning things, especially myself and my choices. Even when I realize that I’m screwing up or have screwed up, even sometimes for years in some aspect of my life, instead of being depressed I get energetic to do something about it.  Jeff is one of the few disciplined people I know who when he recognizes he needs to make a change actually does it consistently. More so than myself for sure, and his discipline with that helps motivate me.

Book wise I finished “Friday Night Lights” the novel.  I’ve now finished the trifecta of the movie, tv series, and the book.  The film I wouldn’t watch again, but the tv series and the book were very well done.  The true story novel is an insider view of America changing (it was chronicled in 1988, but oddly almost nothing feels dated besides the over the top racism) in a small city in Texas that only has their high school football team left for any semblance of pride.  The town is extremely racist and integrated schools were recently introduced causing huge problems, but the city cares so much about winning in football that they will accept minorities if they are good enough to help the team. The author was at every practice, game, meeting, and seemingly any other event that pertained to the team and city.  He was from the East Coast, and the people in the town seemed excited to share their inner thoughts probably not realizing that it would be immortalized in a successful book. It was written with a lot of heart and love for the people in the book though, and I imagine however embarrassing it must have been on publication, it probably turned into something fond as the years went on.  People getting rich during the oil boom and not moving on after it burst was very familiar to me. I’ve seen it in trading, poker, crypto, and real estate. Not that people have to go from one fad to the next, but I’ve seen a lot of people toiling away in an unproductive field years after the boom because they don’t want to go through the effort of learning something new again. I hope and expect society to see major career resets as something normal and necessary in the future.

With that I have to publish this as my laptop is about to die.  Leaving you with some local pictures.  Some of the delicious culinary options (gluten free Arepas) and a few pictures of this co-working space. 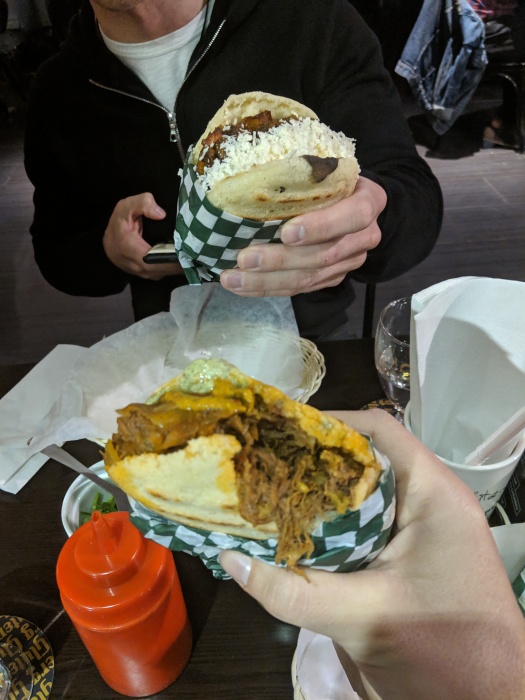 4 Replies to “Week in Montreal”