I fell off the internet for a few weeks now, sorry about that.  I’m starting week 3 here in Medellin, and I’ve had virtually no downtime.  On the weekends I’ve had to catch up on work and unwind a little bit, and I didn’t have the motivation to write when my eyes and brain were exhausted.

It’s been a great first few weeks.  Starting 10 hours after I landed in the night, I’ve been going to a school to learn Spanish Monday-Friday 9am-1pm, plus extra cultural activities, plus an hour of homework nightly (including weekends).  Adding in my normal training, cooking, commuting, and my actual trading work, I spend most of the week in a relatively tired state. A huge part of that I realized today was my sporadic eating. I had 6 eggs and avocado at the gym for breakfast today, and I felt so much more awake than my usual slam coffees and make it through the day fast.  It’s nice to hit the ground running and feeling like a productive local than bumbling around in the beginning though.

I researched good grass-fed butchers before I left, but it wasn’t until today that I finally Ubered to one (La Cava Del Brangus) to stock up on premium foods.  There’s a local store that I’ve been buying from, and I think the majority of beef in Colombia is normally grass-fed, but I was happy to buy from a store with their own farm and guaranteed high quality.

I was doing updates on my weight/health, but I no longer have access to a scale until I get back.  I’ve eaten mostly healthy, and I’m pretty sure I’ve lost a bit of weight. I look better in the mirror, and my pullups/lower-body mobility has improved.  Hopefully the next two weeks go even better as I get my lifestyle here further dialed in.

Trading last month was good, and I’ve got some cool new stuff I’m working on for the future.  I’m excited to ramp the operation up more in a few weeks when I get back to Puerto Rico. Right now things are on autopilot (outside of a few hours a week of research) with my current schedule.  I have a few different visions of how the future could go, and I’m getting a better feeling of what I’d like to take things.

I read a few books over the past few weeks.  My favorite was “The Gambler: How Penniless Dropout Kirk Kerkorian Became the Greatest Deal Maker in Capitalist History”.  I’d heard the name Kerkorian before when I lived in LA, but had no clue who he was. Apparently that was intentional, as he was for a while the richest person in Los Angeles, but also never put his name on anything, and avoided personal publicity as much as possible.

Kirk never graduated high school, and almost died several times in his twenties, but somehow built himself up such that he was able to build and own half of Las Vegas.  I think in the book it said he built the world’s largest hotel 3 times in 25 years. His intersection with so many historical characters, particularly before they were famous, was really enjoyable for me too.

Kirk was still doing major deals into his 80’s, and lived to be almost 100!  I absorbed some information about personal integrity in business in particular that was refreshing, seeing someone who wanted everyone they do deals with to come away happy, and not scamming people because they legally could.  I won’t get into anything else because I don’t want to spoil the surprises, but I really enjoyed it.

I’m going to finish here, and get back to my nerd life of studying and homework.  Saturday my friend Ari is coming to town for the rest of my trip, so hopefully we go out and about and get some content for you.  In the meantime I’ll leave you with a picture of the city, an incredible steak from El Diablo restaurant, and a wild soccer match.  Have a great week, and hope to return to you sooner than 3 weeks next time! 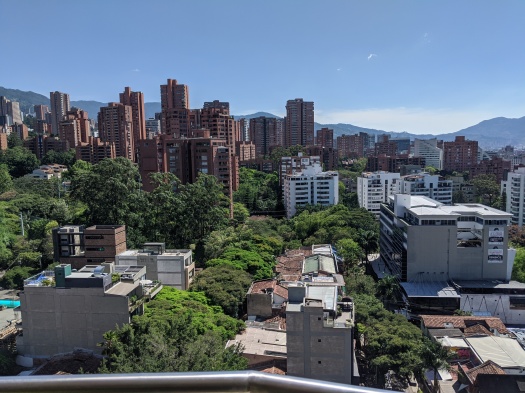 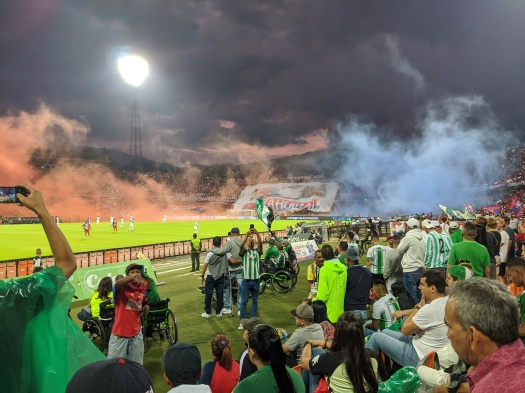 One Reply to “In Medellin”